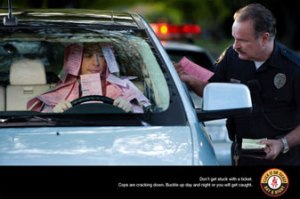 Today begins the annual Click It or Ticket enforcement campaign to increase use of seatbelts. It involves a nationwide mobilization effort of law enforcement agencies and safety advocates, from all levels of government and the private sector. From now until June 1st, motorists will be targeted with messages and possibly enforcement action, including tickets, to again stress the point: seat belts save lives – a simple fact, yet still apparently challenging for some motorists to accept.

In May 2011, nearly a year after joining the NTSB, I wrote a blog about the 2011 Click It or Ticket campaign. What surprised me then and continues to puzzle me, is the continued need for this campaign. Seat belts have been around for more than 60 years, yet nearly one in six Americans still fail to regularly use one when motoring.

We often herald the fact that across the U.S. approximately 86% of all highway vehicle occupants wear a seat belt. But here are some additional statistics to provide a more complete picture:

The motor vehicle remains the primary choice of transportation in the U.S., and for good reason – nothing rivals it in terms of providing freedom and mobility. Yet, motor vehicle crashes are responsible for more deaths annually in the U.S. than in all other transportation modes combined. Comparatively, this figure equates to a commercial airplane crash every other day.

Now, the NTSB is encouraged by the advancement of various safety technologies offered in today’s automobile market, such as adaptive cruise control and blind spot detection systems. We note though, the single greatest defense against injury and death in the event of a motor vehicle crash remains: the use of seat belts. In acknowledgement of this simple concept, the NTSB added Strengthen Occupant Protection in Transportation to its Most Wanted list to promote seat belt usage, and it supports the Click It or Ticket campaign.

Realistically, though, nothing would please me more than to see an end to this campaign and decided victory – it shouldn’t take the threat of a ticket to do the right thing. A few moments of extra care at the outset of a trip can last a lifetime. Please, take the time to click it for life.

Earl F. Weener, Ph.D., took the oath of office as a Member of the National Transportation Safety Board on June 30, 2010. Dr. Weener is a licensed pilot and flight instructor who has dedicated his entire career to the field of aviation safety.