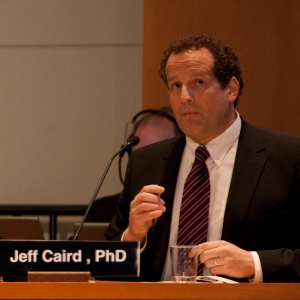 April is National Distracted Driving Awareness Month. It is good to be aware of the danger of distracted driving. It is even more important to move from awareness to action. That’s why the NTSB held a forum this week on Attentive Driving: Countermeasures for Distraction.

What an informative day we had. You can watch the webcast at: http://www.capitolconnection.net/capcon/ntsb/ntsb.htm#. We had distinguished panelists from across the traffic safety spectrum — including academia, government, and safety advocacy organizations.

Dr. Jeff Caird, University of Calgary, noted the contribution of distraction to U.S. traffic fatalities is increasing and that converging evidence across studies shows driver distraction is a problem. Dr. John Lee from the University of Wisconsin talked about the danger from the proliferation of new applications in our automobiles. Many are designed to be used while driving. Their rapid growth, he said, outpaces policy. 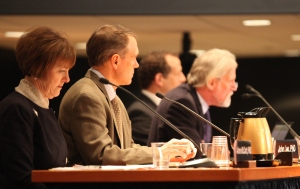 We heard a lot about technology. While technology is contributing to the problem, it can also offer a solution. Dr. Anne McCartt of the Insurance Institute for Highway Safety spoke of the “great deal of promise” with crash avoidance technology to mitigate the risks of distracted driving.

Panelists also spoke about the challenge of changing behavior. We heard about California’s success with tougher laws and strict enforcement. The bigger challenge is changing social norms — getting to the point where it’s just plain unacceptable to talk on the phone and drive, for example.

It is said that the longest journey begins with a single step. We took an important step this week with our work to change the focus from distraction to attention. The more important steps will be the ones each one of us takes every time we climb behind the wheel: paying attention.

This is what we know from the 33,000 people who die each year on our roadways: driving is serious business and deserves all of our attention, all of the time. 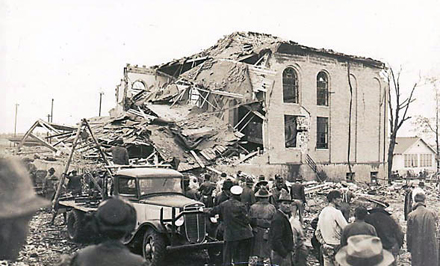 Few people today know about the tragedy that struck a small Texas town  75 years ago. On March 18, 1937, a school in New London, an East Texas oil field community, was blown apart by a natural gas explosion. Nearly 300 people perished, almost all of them children. That explosion destroyed an entire generation in what remains the worst school disaster in U.S. history.

In the days leading up to the accident, students had complained of headaches. Yet, since natural gas is odorless, nobody knew about the growing danger from a leak in a gas line deep inside the school sub-basement.

One moment students were at their lessons. The next moment, when a shop teacher switched on an electrical sander, the building exploded. Witnesses described the walls of the school bulging outward and the roof being lifted off the top of the school before crashing down upon it.

This horrible accident forever changed the lives of everyone in New London and around the country. As is often the case, tragedy can lead to improvement. Lessons learned can prevent future accidents. Out of the New London school explosion came the move to add an odor to natural gas during the manufacturing process so people could detect its presence. This is most important in enclosed spaces, such as houses, apartments, businesses, and, most certainly, schools. This simple safety innovation has prevented countless accidents over the last 75 years.

Despite the many lessons learned and safety improvements implemented since the New London school explosion, we’re still investigating accidents – like the 2010 pipeline rupture explosion in San Bruno, Calif., that killed eight residents in a San Francisco suburb – to identify actions that can improve safety for everyone.

As Chairman of the NTSB, I have the privilege of meeting community and industry leaders from across the country.

This morning, I had the pleasure of meeting two safety champions — Aldermen Jane Grover and Melissa Wynne from the city of Evanston, Illinois to discuss banning cell phone use by drivers. 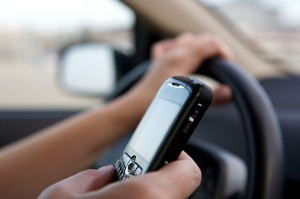 In March 2010, the city council banned the use of handheld cell phones for all drivers.  In the past two years the city has issued about 3,000 tickets for hand-held violations, and 85 percent of those have been paid. That’s a higher rate than for other traffic violations.  More importantly, Evanston has seen a dramatic decrease in accidents — vehicle/pedestrian as well as vehicle/vehicle accidents.

In the coming weeks, the city council will consider a full ban on the use of all portable and on-board communications devices while driving, because they recognize that even with a hands-free device, there is still a cognitive distraction.

These local initiatives may have the greatest impact on safety in a given community. Improvements to safety can trickle down from the Federal to local level – or it can build up from the local level. Evanston’s data demonstrates that they can better protect everyone on the road if drivers are attentive. I applaud Evanston for taking this step forward for safety. Change is not easy, but as the saying goes, there can be change without progress but no progress without change.

Last week, the Federal Aviation Administration (FAA) released its annual forecast, which projected that airline passenger travel will nearly double in the next 20 years. The FAA stated this forecast underscores the need to continue moving forward with implementing the Next Generation Air Transportation System (NextGen) to accommodate the projected growth. 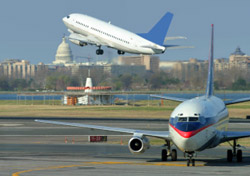 Although not specifically stated, the forecast also underscores the need to heighten the focus on pilot professionalism. With such dramatic growth, the airlines will need more pilots – and with more airplanes carrying more people, the importance of professionalism will be even greater.  Pilot professionalism is one of the items on the NTSB’s Most Wanted List of transportation safety improvements.

I’ve been speaking a lot about this very important topic at venues such at the Bombardier Safety Standdown, and at aviation colleges and universities. In the next six weeks I will speak to students at Embry-Riddle Aeronautical University and Purdue University’s aviation program.

Click http://youtu.be/aVv1yt2rABQ to see apresentation on pilot and controller professionalism to students at the University of North Dakota.

Robert L. Sumwalt was sworn in as the 37th Member of the National Transportation Safety Board on August 21, 2006. He is a frequent contributor to the NTSB blog.

My supervisor was a little surprised when I told him that I wanted to spend three months with the NTSB as part of a leadership development program. My normal place of work is with the Defense Intelligence Agency, so he wondered why I didn’t pursue an assignment at one of the other intelligence agencies with which we routinely work. I explained that I wanted to see how federal agencies beyond the intelligence community operated. After all, the goal for this external assignment was to become acquainted with the culture of another federal agency and observe key leadership attributes, such as executive decision making, problem solving, vision, strategic thinking, and leading change. Consequently, there was no reason to limit myself to agencies like mine. With a previous background in the transportation industry, I felt the NTSB would be a good fit.

While I was familiar with the NTSB mission, I had no idea how the mission was carried out on a day-to-day basis until I began my assignment with the Office of Railroad, Pipeline and Hazardous Materials Investigations (RPH). Over the course of my assignment with RPH, I observed the staff complete its investigation into the deadly 2009 Cherry Valley, IL, train accident and prepare for the NTSB Board meeting where the probable cause would be determined and safety recommendations made. Reading the extensive draft report gave me a sense of the carnage the accident caused, and my follow-on discussions with the investigator-in-charge Dick Hipskind and other staff members gave me insight to the methodical approach RPH uses to uncover the facts and articulate the analysis and findings. As I watched the RPH staff members practice their presentations during mock Board meetings, I was struck by the great effort RPH investigators and staff undertook to examine the accident holistically to not only identify the root cause but also the systemic issues that contributed to the accident.

During my assignment, I also had the opportunity to shadow NTSB Board Member Mark R. Rosekind over a two-day period. In several meetings on the topic of transportation safety, Member Rosekind continually spoke of “raising the bar” or “taking it to the next level,” reflecting a culture of vision, strategic thinking, and leading change advocated by NTSB Chairman Deborah Hersman. As the Board meeting approached and Member Rosekind and his fellow Board members were busy analyzing the Cherry Valley accident report, it was apparent that all their effort and the high level of scrutiny would ensure that the investigation and subsequent findings and safety recommendations would be factual, thorough, and all-encompassing.

Accurately capturing the facts from an accident investigation, articulating the analysis and findings, and offering recommendations in a concise and timely package is a monumental undertaking. Being a change agent and continual advocate for transportation safety is likewise challenging. But the NTSB gets the job done because it routinely exercises key leadership competencies at numerous levels. Since my goal for participating in the leadership development program was to gain insight into leadership competencies, I made a good choice in coming to the NTSB.

Rocco Dryfka is an analyst for the Defense Intelligence Agency on a three-month leadership development assignment to the NTSB Office of Railroad, Pipeline and Hazardous Materials Investigations.