I arrived in the nation’s capital over two decades ago as a college intern believing that government can do important work on behalf of the citizens of this great country.  After nearly 10 years at the National Transportation Safety Board, I will depart Washington with the knowledge that the traveling public is the beneficiary of an accountable, transparent government agency with a great mission focused on saving lives and preventing injuries.

I look back at the hundreds of investigations and recommendations that have been issued during my tenure at the NTSB, and I have seen the landscape of transportation safety improve before my eyes.   Today training standards for transportation professionals are more rigorous, federal safety oversight exists for the rail transit industry, work schedules for pilots, locomotive engineers and truck drivers allow for more rest opportunities, the majority of states ban texting behind the wheel, and all but two states have passed booster seat laws for young children.  These changes and so many other safety improvements are the result of industry, labor, advocates, regulators and legislators all working in their particular spheres of influence to make travel safer for people that don’t always appreciate the risks they face.  The NTSB and often, the families of victims, have served as critical catalysts for bringing about change after a terrible accident.  It has been an honor to be associated with a noble mission that has at times inspired and evoked passion and at other times, been in the crosshairs of controversy, as real change doesn’t come without a cost.  I want to thank President Obama for entrusting me with this tremendous responsibility.

If you are lucky in life, you get a chance to have a dream job. If you are really lucky, you get to have more than one dream job.  I look forward to continuing to improve the safety landscape with the Board of Directors and employees of the National Safety Council, another organization dedicated to saving lives and preventing injuries.  And yes, I know how lucky I am.

Hersman served in the Administrations of both President Obama and President Bush.  She was confirmed unanimously in 2004, 2009, 2011 and 2013 by the U.S. Senate under both Republican and Democratic leadership.

During her Chairmanship, Hersman focused on accountability, integrity and transparency. She elevated the stature of the NTSB with external stakeholders and the public by tripling the number of investigative hearings and public events hosted by the NTSB each year; completing many major accident investigations within 12 months; and revamping the agency’s public and media presence through strategic use of digital communications. Her efforts also enhanced the NTSB’s international relationships, increased advocacy efforts with key stakeholders in government and industry, and elevated the treatment of families of victims of transportation accidents. Her leadership resulted in a more powerful voice for the traveling public.

Hersman will continue to lead the agency until April 25th.  Vice Chairman Christopher Hart will serve as Acting Chairman upon her departure.

Our transportation infrastructure—roads, railways, waterways, and airports— is what makes the movement of people and goods possible; it drives our economy. In a way, our infrastructure is like a house – America’s house. It needs to be maintained for ourselves and generations to come. In his State of the Union address, President Obama proposed a “fix-it-first” approach to investing in our nation’s deteriorating infrastructure. And the NTSB believes that as these investment decisions are made, safety needs to have a seat at the table.

The “Fix it First” plan makes repairing and upgrading existing roads, bridges and public transportation systems a priority over spending on new projects. In 2006, 70,000 of the roughly 600,000 bridges nationwide were classified as “structurally deficient,” meaning that major deterioration, cracks or other flaws reduced its ability to support vehicles.

Back in 2006, the I35W bridge in Minneapolis was identified as a structurally deficient bridge. Before improvements could be made, that bridge collapsed on August 1, 2007, killing 13 people and injuring another 145. In our subsequent investigation of this tragedy, the NTSB identified three critical factors that contributed to this collapse: (1) a failure in the design firm’s quality control procedures to ensure that all calculations were performed correctly, (2) inadequate design review by Federal and State transportation officials, and (3) inadequate attention to a critical bridge component during inspections.

In “Fix It First, Expand It Second, Reward It Third: A New Strategy for America’s Highways,” a report by The Hamilton Project at the Brookings Institution, authors Matthew Kahn and David Levinson argue that the roads and bridges that make up our nation’s highway infrastructure are in disrepair as a result of insufficient maintenance — a deficit that increases travel times, damages vehicles, and can lead to accidents that cause injuries or even fatalities. This report emphasizes that if we want to prevent future tragedies, such as the I35W bridge collapse, we need to make effective investments that put safety at the center.

Today, Member Robert Sumwalt and I had the opportunity to visit with Carolina Gas Transmission, a SCANA company that delivers natural gas to wholesale and direct industrial customers throughout South Carolina. We met with company leaders and safety officials at their headquarters in Columbia, South Carolina. In the morning, we heard about their capital maintenance program to replace, inspect and maintain 1,469 miles on their transmission lines in South Carolina and Georgia, over half of which were laid prior to 1970.

In the afternoon, we traveled to Lexington, SC, to observe a 12″ pipeline confirmatory dig. The dig’s purpose: to conduct additional radiographic exams (or X-rays) of the pipe using GPS locations noted in previous in-line inspections that had established the basis for further evaluation. A crew had excavated a 40’ section of Line ‘M’ and was evaluating the pipe’s condition when we arrived.

We finished the day with a visit to their control center where we saw how employees monitor pipeline operations and heard how their emergency response process is designed to work. It was a busy day, but a good opportunity for us to hear from pipeline company employees about their vision of safety, from the CEO to a backhoe operator.

On Monday, Detroit opened the North American International Auto Show, showcasing new concepts, new technologies and new ideas. During our visit to the auto show, my colleagues, Earl Weener and Mark Rosekind, and I heard firsthand from automakers and suppliers about their efforts to address safety. In particular, we learned more about their investments in two of this year’s Most Wanted List areas: collision avoidance technology and distraction.

They are clearly putting their investments into technology. We saw impressive new concepts for the future of safety, but more importantly we saw safety features becoming standard equipment on many different models. No longer are backup cameras, adaptive cruise control and lane departure warning systems found only on luxury vehicles, they are now widely available across a spectrum of makes and models. 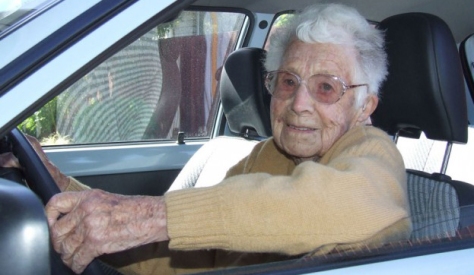 Here’s something to think about as you draw up your list of New Year’s resolutions: driving and mobility planning.

Just as we plan ahead for financial stability in retirement, it’s important to plan for mobility as we age. Mobility is so important for independence, social connectedness and quality of life, but it’s often overlooked when planning for the golden years.

When I visit my mother she hands me her car keys. I give them right back. She needs to keep her skills up. Research shows that it’s low-mileage drivers — under about 3,000 miles a year — who are more at risk for accidents.

There’s a lot more we know about aging and driving than when my mother worried about her mother’s driving a generation ago. For one, there are more Americans over age 65 than at any other time in U.S. history and they are keeping their driver’s licenses longer. We also know from accident data that older Americans are driving more safely. According to the Insurance Institute for Highway Safety, the rate of fatal crashes per licensed driver age 70 and older dropped about 37 percent from 1997 to 2008.

It is still the young novice drivers who are the greatest risk on our roadways.

Older drivers are better at self -regulating and tend to be more safety conscious. They wear seat belts and drive less frequently at night or in bad weather. They’ll avoid rush-hour traffic and stick to routes and roads that they know. And, they are less likely to drink and drive.

Yet, as we age we can lose the abilities that help us be good drivers. The decline in vision, both in sharpness and in the ability to see contrast, is just one functional loss. There’s also a falloff in the speed in which we perceive and process information, as well as degradation in memory and cognition. These performance limitations are associated with medical impairments – impairments more likely as we grow older.

With impairments come treatments, including medication, a huge issue for safe driving. If the medication is labeled “do not operate heavy machinery while using this medication,” be assured that your two-ton personal vehicle is heavy machinery. We’ve seen the deadly effects of medication-impaired driving in too many accident investigations.

Of particular concern for driving safely is dementia. Those are the drivers whose accidents make dramatic headlines, like the 100-year-old driver who backed into a group of people last summer in Los Angeles. Advanced age can make a big difference, as we saw in our recent special investigation of wrong-way driving accidents on limited-access highways. Our research showed that drivers over age 80 were dramatically overrepresented in wrong-way driving crashes with almost 30 times more wrong-way drivers.

But, there’s good news for my mother and her cohort. In December, during the American Occupational Therapy Association’s (AOTA) Older Driver Awareness Week, I checked in with Elin Schold Davis, who coordinates the association’s older driver initiatives. Schold Davis said the first sign of a problem in driving doesn’t mean the older driver has to give up the car keys.

It’s like any other health condition. A warning sign should prompt the driver, as well as concerned family members, to figure out what is causing the problem so it can be addressed. It may not require a choice between driving and not driving. It could mean a vision check and stronger eyeglasses or cataract surgery, more self-regulation or getting a driving fitness evaluation, which is offered by many occupational therapists.

There are a host of resources, from AAA, AARP, AOTA, among others, that can help older drivers plan for mobility in order to safely retain their independence and quality of life. The younger generation can help older family members in this planning. That’s why “Talk with Mom about mobility planning” is on my list of 2013 New Year’s resolutions. Then, I’ll hand her the keys.

Each year in the United States, about 35,000 people die in transportation accidents. Yes, roadway fatalities lead the list, with nearly 33,000 fatalities last year. Motor vehicle accidents are the leading cause of death in our country for those aged 3 to 34; for older Americans, highway fatalities are right there alongside heart disease, cancer, and stroke as a leading killer.

So many of those 35,000 fatalities — each one a tragic loss of a loved one — can be prevented with commonsense safety precautions.  Along with getting a bit more exercise or losing a couple of holiday pounds, what if you could guarantee a longer, healthier life by simply making better choices behind the wheel?  In 2012, do something to improve your odds by adopting a few new habits this year, and to quote Flannery O’Connor :  “The life you save may be your own.”

1    Don’t operate any vehicle while impaired by alcohol or fatigue.

3    Buckle up for safety … all passengers, all the
time.

Practice these safety tips, share them with your family and friends, and best wishes for a happy and healthy 2012.