Spring marks the start of road construction season. It is a time when motorists face lane closures, speed reductions, and road workers and equipment operating close to moving traffic. If drivers are inattentive road work can result in crashes that kill or injure road workers and motorists.

National Work Zone Awareness Week is April 11-15 —a time to recognize the hazards of traveling in and around work zones. The NTSB has a long history of promoting work zone safety. I recall the agency conducting a safety study in 1988, involving the investigation of more than 40 work zone accidents. In 1992, we completed the study, Highway Work Zone Safety, which contained safety recommendations to the Federal Highway Administration to address commercial motor vehicles traveling in work zones. We also issued recommendations to enhance speed compliance and traffic control within work zones following the investigation of a 1990 crash in West Virginia.

I led an investigation of a 2014 work zone crash in Cranbury, New Jersey, involving a commercial motor vehicle (which the media dubbed “the Tracy Morgan” crash). Our investigation found that the commercial vehicle was speeding in a nighttime work zone when it encountered slow-moving traffic in advance of a lane closure. The fatigued driver failed to perceive the slowing traffic until it was too late to do anything. The commercial vehicle struck the rear of a limo van, and this impact began a chain-reaction collision involving four other vehicles. One of the limo van occupants died, and nine other people were injured in the crash.

Work zones are becoming safer because of the use of new technologies and more efficient traffic management. However, until we make more headway against the over-involvement of commercial vehicles in fatal work zone crashes, the road construction season will remain a dangerous time, requiring motorists to be especially attentive to the driving task.

Pete Kotowski is a Senior Accident Investigator in the NTSB’s Office of Highway Safety.

On July 22, UPS announced it would make collision avoidance systems (CAS) standard equipment on all new class 8 tractors it orders, including the more than 2,600 new tractors it will acquire in 2015. Class 8 vehicles are those with a gross vehicle weight rating over 33,000 pounds, such as most tractor-trailers and dump trucks—typically vehicles with three or more axles.

In its announcement, UPS cited the NTSB’s Special Investigation Report, The Use of Forward Collision Avoidance Systems to Prevent and Mitigate Rear-End Crashes. In our report, we discussed how more than 80 percent of deaths and injuries from rear-end crashes might have been mitigated had vehicles been equipped with a collision avoidance system. A Safety Alert urging consumers and fleet owners to consider transitioning their fleets to vehicles equipped with collision warning and autonomous emergency braking (AEB) also accompanied the report’s release.

UPS’s decision to equip its fleet with CAS is part of a growing trend, as companies recognize the safety benefits associated with these systems. For example, Walmart, Conway, and Quickway Transportation have their entire fleet already equipped with CAS or are purchasing truck-tractors with the latest generation of forward CAS.

The NTSB has called for technological approaches to address rear-end collisions since 1995, and although some progress has been made, far too many rear-end crashes still occur. For example, in 2012 alone, more than 1.7 million rear-end crashes occurred on our nation’s highways, resulting in more than 1,700 fatalities and 500,000 injured people. Many of these crashes could have been mitigated, or possibly even prevented, with forward CAS.

Forward CAS works by monitoring the environment—either via lidar (light detection and ranging), radar, camera, or a fusion of different technologies—for potential conflicts, such as a slow moving or stopped vehicle. When it detects a conflict, it alerts a driver through different warning cues. If the conflict persists, the system initiates AEB or provides additional braking force if the driver does not brake strongly enough.

The benefits of forward CAS are considerable for large trucks; however, according to one industry estimate, only 8–10 percent of truck-tractors in the United States in 2013 were equipped with these systems.

Based on the available research evidence and testing that support the benefits of forward CAS, we have recommended that passenger vehicle, truck-tractor, motorcoach, and single-unit truck manufacturers install forward CAS that include, at a minimum, a forward collision warning component, as standard equipment on all new vehicles. And once performance standards for autonomous emergency braking are complete, those systems should also be included as standard equipment.

Forward CAS systems are currently available as options on many cars and trucks. We applaud UPS and the other companies I mentioned for installing these live-saving systems. More carriers should follow suit.

Jana Price, PhD, is Chief of the Report Development Division in NTSB’s Office of Highway Safety.

Last week, host Mark Willis of Road Dog Trucking News interviewed me about a recent NTSB report on collision avoidance systems (CAS). He wanted to share with his listeners the benefits of technology that not only warns a driver of an imminent crash into something ahead, but also stops the vehicle if the driver doesn’t.

The show’s call-in format gave me the opportunity to talk directly to truck drivers who would benefit from this technology—and to listen to them as well. (The host frequently reminded drivers not to call in while driving.) It was a conversation with an audience whose business is on the highway, hour after hour, week after week, and whose business is crucial to our country’s economy.

Without a doubt, commercial truck drivers are aware that heavy trucks require longer stopping distances. That is why collision mitigation can be so beneficial for commercial vehicles.

For trucks, a complete CAS includes collision warning, which warns drivers about an imminent obstacle ahead, and autonomous emergency braking (AEB) to stop the truck if the driver does not heed the warning.

Some skeptical callers said that AEB would destabilize the vehicle by stopping it abruptly. That concern is why our June report recognized that AEB should be paired with electronic stability control (ESC), something that many commercial trucking fleets recognize. ESC would be essential, as it would prevent jack-knifing and loss of control during AEB applications.

The commercial vehicle industry estimates that about 10 percent of new truck-tractors are already equipped with collision warning and AEB systems. Some companies are already transitioning their fleets to CAS-equipped truck-tractors, not only to improve safety and save lives, but also to save money (e.g., workers comp and numerous other costs resulting from a crash).

The NTSB has been pushing for crash mitigation technology for commercial vehicles for two decades. We issued our first recommendations on testing these technologies in 1995.

In 2001, we urged NHTSA to develop adaptive cruise control and collision warning system performance standards, and then to use those standards to mandate standard collision warning on all new commercial vehicles. NHTSA has yet to satisfy these recommendations, although its new ESC rule is a good and necessary first step.

The recommendations we released in our latest report would help bring CAS technology to members of the Road Dog audience. The NTSB called for truck-tractor and single-unit truck manufacturers to immediately install, at a minimum, the collision warning component of CAS. Further, we asked manufacturers to add AEB systems once NHTSA completes performance standards for those systems.

Along with our 2015 report, we issued a safety alert to fleet owners and consumers of passenger vehicles. This alert advises purchasers about the safety benefits of CAS, and urges them to request vehicles with AEB and collision warning. And if truckers don’t see CAS in their trucks, they should ask their companies for it because their lives and the lives of the traveling public could depend on it.

Christopher Hart is Chairman of the National Transportation Safety Board. 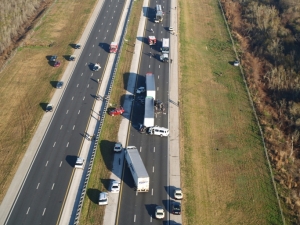 Motor vehicle crashes are the leading cause of death for children and the second leading cause of accidental death for adults, claiming more than 30,000 lives annually. Now the good news: That toll is down from more than 50,000 deaths every year from 1966–1973, even though today there are far more drivers on the road.

This reduction in fatalities is in large part due to the single greatest lifesaving technology available to each of us in the event of a crash: the seat belt. Since 1975, seat belts have saved more than 317,645 lives.

Through advances in safety and technology, we’ve seen the development of air bags, a supplemental safety device, providing an additional level of protection for a driver or passenger correctly restrained using a seat belt. Since 1987, frontal air bags have saved nearly 40,000 lives.

Today, seat belts and air bags are available as standard safety equipment in all passenger vehicles.

Yet in 2012 alone, more than 1.7 million rear-end crashes killed more than 1,700 people and injured 500,000 on American roads. And more than 80% of those deaths and injuries might have been prevented or mitigated with another technology: collision avoidance systems.

This week, the NTSB released a Special Investigation Report, The Use of Forward Collision Avoidance Systems to Prevent and Mitigate Rear-End Crashes.

The lag in making collision avoidance systems standard equipment in all new vehicles is creating an unacceptable safety gap, leading to preventable deaths and injuries. Only 4 of 684 passenger vehicle models in 2014 included a complete forward collision avoidance system as a standard feature. The rest don’t offer it, or make you pay for it as an option. Often, it is packaged with luxury items.

You shouldn’t have to buy a luxury vehicle or a luxury option package to get a complete collision avoidance system.

Our report recommends that vehicle manufacturers include these systems on new vehicles as standard equipment. We also recommend that NHTSA develop ratings for collision avoidance systems, disclose the ratings for each vehicle on the window sticker, and include these ratings in its 5-star safety rating scale.

The NTSB issued its first recommendation on such technologies in 1995. But until now, progress has been limited. One problem is that even better technologies always seem to be on the horizon. But as Mark Twain put it, “Continuous improvement is better than delayed perfection.”

The time to improve the safety of our passenger vehicles and commercial fleets is now.

The full report includes the conclusions of the research and recommendations to the National Highway Traffic Safety Administration and to passenger vehicle, truck-tractor, motorcoach, and single-unit truck manufacturers.